A Case Report of Fournier’s Gangrene

DOI: https://doi.org/10.21980/J8Z356 Issue 7:2 No ratings yet.
Physical exam revealed a comfortable-appearing male patient with tachycardia and a regular cardiac rhythm. The genitourinary exam indicated significant erythema and fluctuance of the bilateral lower buttocks with extension to the perineum. Black eschar and ecchymosis were also noted at the perineum. There was significant tenderness to palpation that extended beyond the borders of erythema. There was no palpable crepitus on initial examination. Physical exam was otherwise unremarkable.
Infectious DiseaseUrologyVisual EM 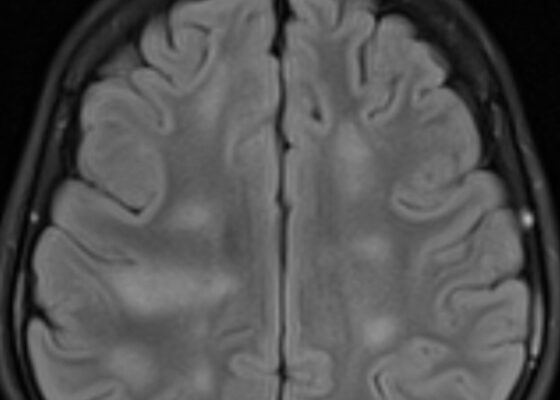 DOI: https://doi.org/10.21980/J8JW75 Issue 7:2 No ratings yet.
The neurology service was consulted in the ED and multisequence MRI and MR angiography (MRA) of the brain were obtained without and with IV contrast. Diffusion-weighted imaging (DWI) and T2-weighted-Fluid-Attentuated Inversion Recovery (FLAIR) sequences showed multifocal small areas of diffusion signal abnormality in the brainstem and basal ganglia (red asterisks) suggestive of ischemia. Additional multifocal bilateral supra- and infratentorial foci of signal abnormality including subcortical white matter and deep grey matter were highly concerning for encephalitis or demyelinating disease. MRI was repeated on day 3 and day 7 during evolution of disease.
Infectious DiseasePediatricsVisual EM

DOI: https://doi.org/10.21980/J8TH1K Issue 6:3 No ratings yet.
By the end of this simulation session, learners will be able to: (1) manage a patient with altered mental status (AMS) with fever while maintaining a broad differential diagnosis, (2) recognize the risk factors for meningococcal meningitis, (3) manage a patient with worsening shock and perform appropriate resuscitation, (4) develop a differential diagnosis for thrombocytopenia and elevated international normalized ratio (INR) in an altered febrile hypotensive patient with rash, (5) manage the bleeding complications from WFS, (6) discuss the complications of meningococcal meningitis including WFS, and (7) review when meningitis prophylaxis is given.
Infectious DiseaseNeurologySimulation 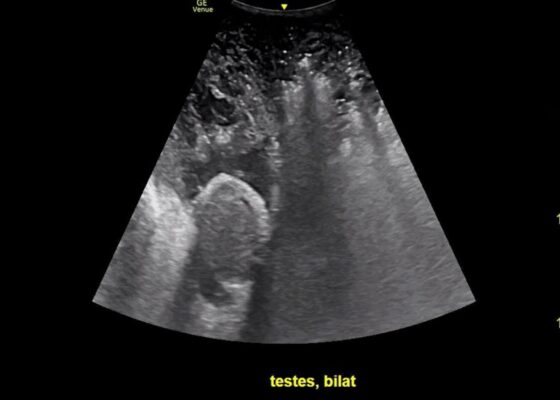 DOI: https://doi.org/10.21980/J85051 Issue 6:2 No ratings yet.
A consultative scrotal ultrasound was performed, which was read as showing a small right hydrocele, small bilateral scrotal pearls, and normal-appearing testes. Although present, there was no mention of subcutaneous air suggestive of NF, seen in figure 1 as punctate hyperechoic foci (arrowhead) with ring-down artifact known as dirty shadowing (arrow). Also, subcutaneous thickening (asterisk) and free fluid (arrow) were seen as shown in figure 2, although their clinical relevance was not recognized in the radiologist's final report. Figure 3 shows an abdominal and pelvic CT that re-demonstrates subcutaneous air in the scrotum and lower abdomen (arrow) as well as fascial thickening of the perineum and free intra-abdominal air. After these images, the patient was transferred to our hospital for further management. Almost immediately after the patient's arrival, POCUS was employed. As seen in figures 4, we were able to identify in just a few minutes extensive subcutaneous air accompanied by dirty shadowing, as well as re-demonstration of subcutaneous thickening, fluid collections, and a right hydrocele. Even without the outside hospital's CT, the sonographic findings were highly suggestive for the diagnosis of NF of the perineum, also known as Fournier’s gangrene.
Infectious DiseaseVisual EM

Auricular Perichondritis after a “High Ear Piercing:” A Case Report

DOI: https://doi.org/10.21980/J8WH16 Issue 6:2 No ratings yet.
On physical examination, there was erythema, swelling, warmth, and general exquisite tenderness of the superior aspect of the left pinna (the outer ear) but excluding the ear canal, lobe, tragus, and crus. There was no facial involvement. There was no fluctuance about the ear and no drainage of fluid. The preauricular lymph nodes were enlarged and tender, but the anterior cervical lymph nodes were not tender. There was no mastoid tenderness, protrusion of the ear, or interruption of the postauricular crease.
ENTInfectious DiseaseVisual EM 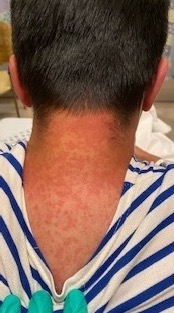 DOI: https://doi.org/10.21980/J86W72 Issue 6:1 No ratings yet.
The images demonstrate a diffuse, flat, maculopapular exanthema along the torso, bilateral upper and lower extremities, and neck without edema consistent with reported cutaneous manifestations of COVID-19. There are no surrounding bullae, vesicles, or draining. On palpation, there was blanching of the rash. Sensation to light touch was intact in all extremities. The findings were also apparent on the face with no mucosal involvement.
DermatologyInfectious DiseaseVisual EM 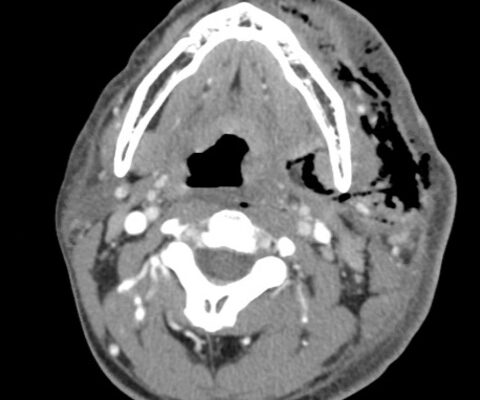 DOI: https://doi.org/10.21980/J8XW7KIssue 5:4 No ratings yet.
Computer tomography (CT) imaging of soft tissues of the neck and of the chest/abdomen/pelvis revealed extensive swelling and subcutaneous air (see red arrows) on the left side of the face and neck extending to the left shoulder, as well as parapharyngeal/retropharyngeal spaces and posterior/superior mediastinum.
Infectious DiseaseVisual EM

Improving Emergency Department Airway Preparedness in the Era of COVID-19: An Interprofessional, In Situ Simulation

DOI: https://doi.org/10.21980/J8V06M Issue 5:3 No ratings yet.
At the conclusion of the simulation session, learners will be able to: 1) Understand the need to notify team members of a planned COVID intubation including: physician, respiratory therapist, pharmacist, nurse(s), and ED technician. 2) Distinguish between in-room and out-of-room personnel during high-risk aerosolizing procedures. 3) Distinguish between in-room and out-of-room equipment during high-risk aerosolizing procedures to minimize contamination. 4) Appropriately select oxygenation therapies and avoid high-risk aerosolizing procedures. 5) Manage high risk scenarios such as hypotension or failed intubation and be prepared to give push-dose vasoactive medications or place a rescue device such as an I-gel®.
Infectious DiseaseProceduresRespiratorySimulation 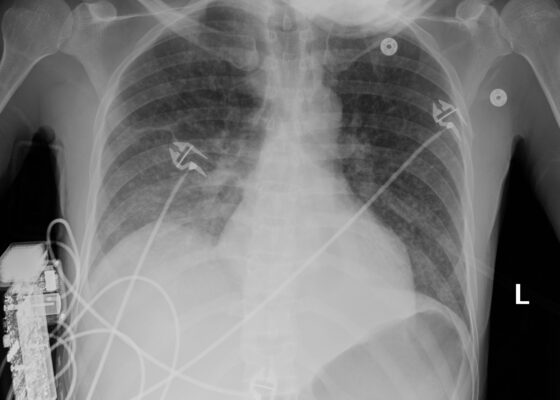