DOI: https://doi.org/10.21980/J8F947 Issue 6:4 No ratings yet.
A post-ROSC electrocardiogram revealed ST elevations in leads I, aVL, and V3-V6, with reciprocal ST depressions in leads II, III, and aVF. Initial troponin I level was 0.238 ng/mL and a bedside cardiac ultrasound revealed decreased motion of the anterior wall. Cardiology was consulted and the patient was immediately taken to the catheterization lab where she was found to have long and diffuse luminal narrowing of her distal left anterior descending artery (LAD) resulting in 70% stenosis, consistent with the angiographic appearance of an intramural hematoma caused by dissection (white arrows). No intervention was performed.
Cardiology/VascularCurrent IssueVisual EM 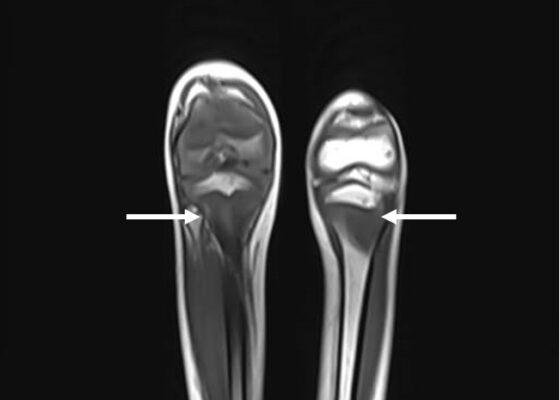 A Boy with Rash and Joint Pain Diagnosed with Scurvy: A Case Report

DOI: https://doi.org/10.21980/J89H1X Issue 6:4 No ratings yet.
His lower extremity magnetic resonance imaging (MRI) findings showed abnormal signals in his knees, which were most consistent with scurvy. The white arrows on the T1-weight sequence indicate hypointensity (decreased signal or darker region) of the knees. The white arrows in the T2-weighted short-tau inversion recovery (STIR) sequence indicate hyperintensity (increased signal or brighter region) in an MRI of the knees.
Current IssuePediatricsVisual EM 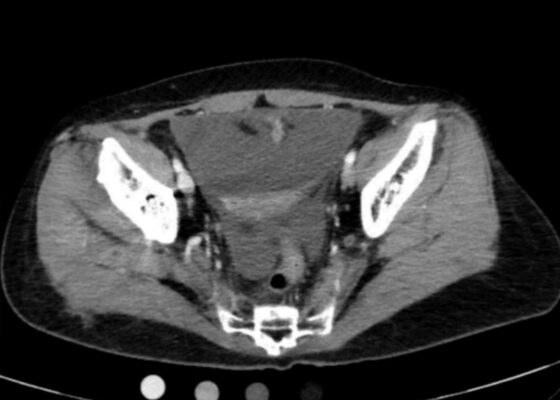 DOI: https://doi.org/10.21980/J85S83 Issue 6:4 No ratings yet.
On regular CT scan imaging, the urinary bladder is partially distended with contrast with no focal wall thickening or intraluminal hematoma. There is an intraperitoneal bladder rupture with site of rupture likely at the dome of the bladder. The bladder is outlined in red, and the bladder rupture boundaries are outlined in yellow, showing the urine as free fluid escaping into the intraperitoneal space. We also provide these findings in an axial CT in video format. On CT cystography, there is a significant amount of contrast-enhanced urine noted within the visualized peritoneal spaces. The small amount of air present anteriorly is related to the catheterization because a Foley balloon is present within the bladder. These findings are annotated with the peritoneal spaces outlined in yellow, the air in the blue outline, and the bladder in the red outline. All of these CT cystography findings are also presented in an axial view in video format.
Current IssueUrology 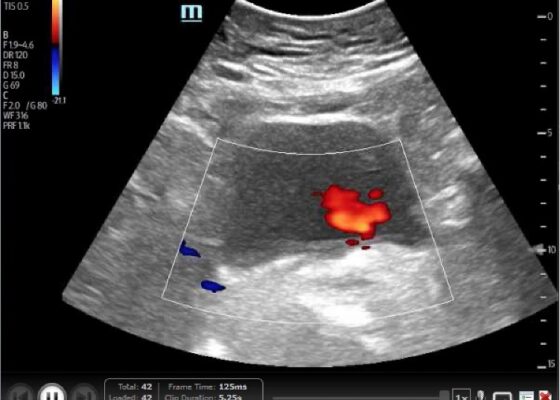 DOI: https://doi.org/10.21980/J8206G Issue 6:4 No ratings yet.
A point-of-care ultrasound of the urinary tract was performed, evaluating the kidneys and bladder. When imaging her kidneys, right-sided hydronephrosis was noted with a normal appearance to the left kidney. To further evaluate, a curvilinear probe was placed on her bladder with color doppler to assess for ureteral jets. Ureteral jets are seen as a flurry of color ejecting from each of the ureters as urine is released from the ureterovesical junction. In a healthy patient, this finding should be seen ejecting from both ureters every 1-3 minutes as the kidneys continue to filter the blood and create urine to be stored in the bladder. In our patient, however, ureteral jets were only noted on the left side (arrow), which was significant in further verifying our suspicion of right ureteral obstruction.
Current IssueUltrasoundUrologyVisual EM 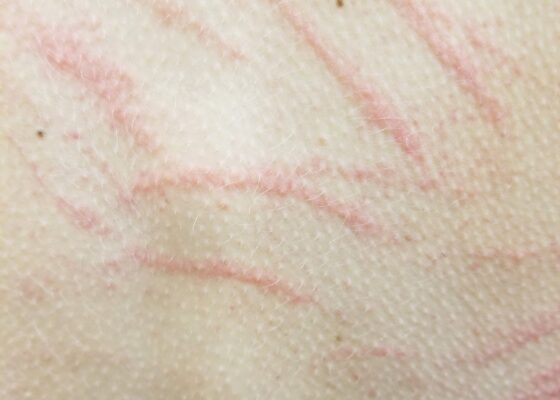 A Culinary Misadventure: A Case Report of Shiitake Dermatitis

Chia-Yuan Michael Lee, DO* and Michael T Dalley, DO*

DOI: https://doi.org/10.21980/J8X936 Issue 6:4 No ratings yet.
Close visual examination revealed erythematous linear papules on her upper and lower back. No bullae, drainage, or sloughing of the skin was present. The rest of her body, including palms, soles, and mucosa, was spared.
Current IssueDermatologyVisual EM 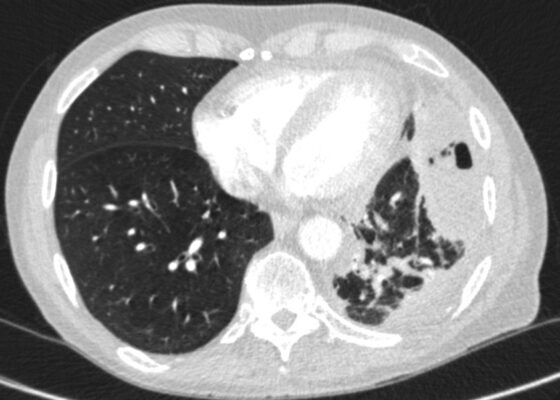 Case Report of an Empyema Identified on Lung Ultrasound

DOI: https://doi.org/10.21980/J8SH2N Issue 6:4 No ratings yet.
Using a curvilinear ultrasound probe, images of the patient were obtained from the left mix-axillary line. These images demonstrate a loculated left-sided pleural effusion (outlined in the attached ultrasound image in blue) that was moderate in size, concerning for an empyema. The diaphragm on the right (red) of the image outlines the inferior margin of the collection of pus, which is seen in the inferior aspect of the left lung. Unfortunately, rib shadows on the left side of the image prevent the full empyema from being captured in this single image. As a result of the bedside ultrasound, however, the patient was rapidly diagnosed with an empyema and was initiated on antibiotics, which is further discussed below. After his bedside ultrasound was completed, his chest x-ray revealed the expected left-sided pleural effusion. Additionally, a CT angiogram of the chest was ordered to rule out a pulmonary embolism, which was negative for an embolism but does redemonstrate the left-sided loculated pleural effusion (outlined on the CT axial and coronal images in blue).
Current IssueRespiratoryVisual EM 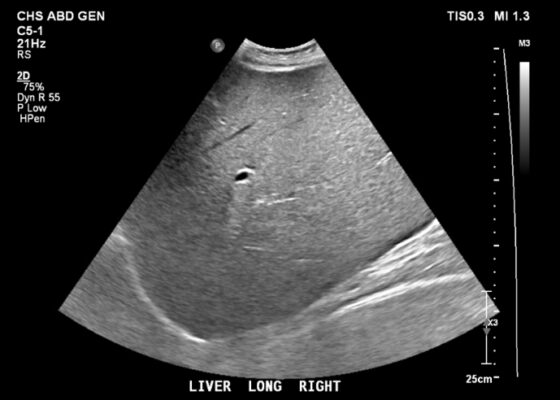 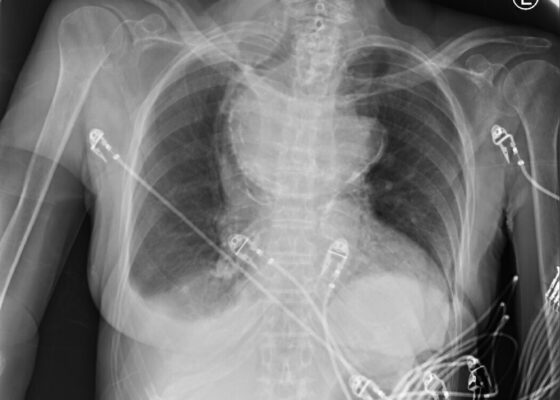 DOI: https://doi.org/10.21980/J80645 Issue 6:3 No ratings yet.
In the image, one can see significant tracheal deviation around the right side of the mass (black arrows). This degree of deviation would make ventilation in a paralyzed patient extremely difficult, if not impossible.
EndocrineVisual EM 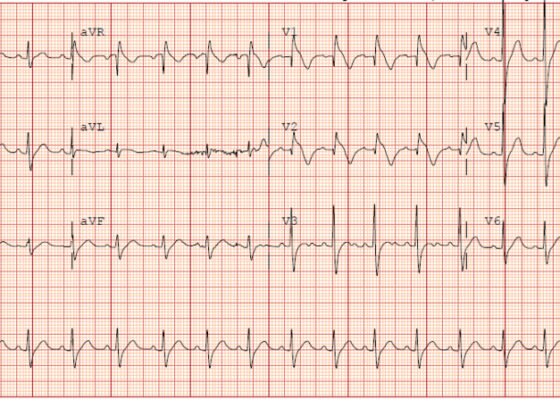 DOI: https://doi.org/10.21980/J8VH28 Issue 6:3 No ratings yet.
Initial EKG was concerning for type I Brugada pattern with an incomplete right bundle branch block in V1 & ST segment elevation terminating in an inverted T wave in V2. There are also signs of sodium channel toxicity with a widened QRS complex, tachycardia and a terminal R wave present in aVR where the R wave is bigger than the S wave or the R wave is over 3mm in aVR.
Cardiology/VascularVisual EM 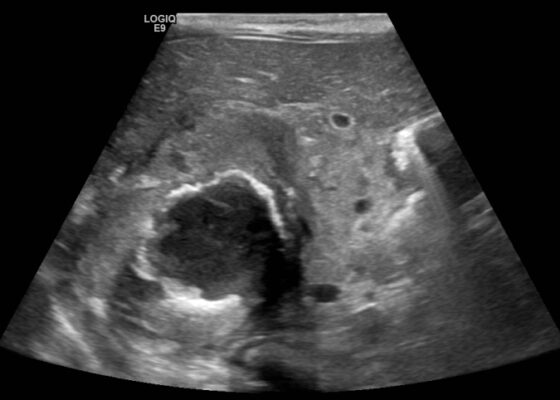 A Case Report of Neonatal Vomiting due to Adrenal Hemorrhage, Abscess and Pseudohypoaldosteronism

DOI: https://doi.org/10.21980/J8QQ0B Issue 6:3 No ratings yet.
An ultrasound (US) of the abdomen was obtained to evaluate for possible pyloric stenosis (see US transverse/dopper imaging). While imaging showed a normal pyloric channel, it revealed an unexpected finding: a complex cystic mass arising from the right adrenal gland (yellow outline), measuring 5.8 by 4.0 by 6.4 cm with calcifications peripherally and mass effect on the kidney without evidence of vascular flow (blue arrow). Computed tomography (CT) of the abdomen/pelvis with IV contrast was subsequently obtained and measured the lesion as 2.8 by 4.6 by 4 cm without evidence of additional masses, lymphadenopathy or left adrenal gland abnormality (see CT axial, coronal, and sagittal imaging).
EndocrineVisual EM
1›»
Page 1 of 28
JETem is an online, open access, peer-reviewed journal-repository for EM educators