A Rare Cause of Pelvic Pain in a Teenage Girl

Correspondence should be addressed to Amber Marie Hathcock, MD at ahathcock@gmail.com

A 14-year-old female presented with rectal pain, pelvic pressure, urinary hesitancy and difficulty defecating despite daily laxative use. She had a history of irregular periods and was currently menstruating. Her vital signs were normal. Her abdominal exam was unremarkable and the external genitourinary exam showed a visible vaginal introitus and no masses.

Due to pain out of proportion to her exam, an ultrasound of her pelvis was obtained and showed a blood-filled distended uterus, or hematometrocolpos (white arrow), with a 4.9 cm right ovarian cyst (blue arrow). A pelvic magnetic resonance imaging (MRI) then revealed an obstructed right hemi-vagina, normal left uterus and vagina and ipsilateral renal agenesis (red arrow) with normal left kidney (double arrow) consistent with obstructed hemivagina, ipsilateral renal agenesis (OHVIRA) syndrome. The patient underwent surgical repair with complete resolution of symptoms.

OHVIRA is rare syndrome that occurs due to a failure of lateral fusion of the Mullerian ducts.1 It affects an estimated 0.1%-3.8% of the population.2 The majority of these cases are associated with ipsilateral renal anomalies, but up to half can have contralateral anomalies.1,2 The most common presenting symptom is pelvic pain.1 On physical exam, patients may have a bulge in the vaginal wall which represents hematometrocolpos due to obstruction of outflow of menstrual blood. Transabdominal pelvic ultrasound or MRI are helpful modalities for diagnosis in adolescents.1,3 In one pediatric case series of OHVIRA, all 8 patients had a history of normal menses and presented with acute or chronic pelvic pain that began after menarche.2 All patients in this case series were initially misdiagnosed, due to the rarity of the disorder and the fact that most patients have a history of regular menses despite progressive pelvic pain. Definitive treatment requires surgical excision of the vaginal septum. Post-surgical prognosis is typically good;4-6 potential complications include endometriosis and increased risk for preterm labor or malpresentation.7 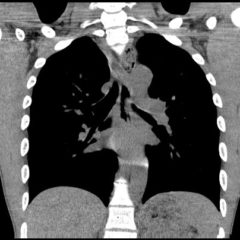 Acute Dysphagia in a 25-Year-Old Male 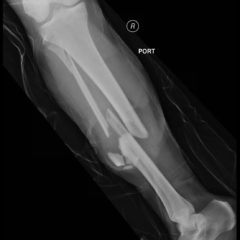