Bedside Ultrasound for the Diagnosis of Small Bowel Obstruction

Correspondence should be addressed to Maili Alvardo, MD at maili.alvarado@gmail.com

Abdominal/GastroenterologyVisual EM
No ratings yet.

An elderly female with no history of prior abdominal surgeries presented to the emergency department (ED) with acute onset of abdominal pain and distention.  Upon arrival, she began having large volume bilious emesis. While waiting for a computed tomography (CT) scan of her abdomen and pelvis, a point of care ultrasound (POCUS) was performed which showed evidence of a small bowel obstruction (SBO). The patient had a nasogastric tube placed that put out over two liters of bilious contents. A subsequent CT scan confirmed the diagnosis of SBO from a left inguinal hernia and the patient was admitted to the surgical service.

While CT scan remains a widely accepted modality for diagnosing SBO, ultrasound is more cost effective, well tolerated, does not involve ionizing radiation, and can be done in a timely manner at the patient’s bedside. Ultrasound can also identify transition points as well as distinguish between functional and mechanical obstruction.6 In addition to SBO, ultrasound can be used to diagnose external hernias, intussusception, tumors, superior mesenteric artery (SMA) syndrome, foreign bodies, bezoars, and ascariasis.7 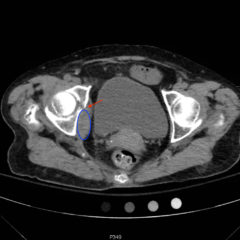