Correspondence should be addressed to Chirag Shah, MD at shahcn@rwjms.rutgers.edu

70-year-old male with a history ventricular arrhythmia, AICD (automated implantable cardioverter defibrillator), coronary artery disease and cardiac stents presented to the Emergency Department after three AICD discharges with dyspnea but no chest pain. During triage, he was found to have an irregular radial pulse and was placed on a cardiac monitor.

The patient was found to be in a polymorphic ventricular tachycardia; he was alert, awake and asymptomatic. A rhythm strip showed a wide complex tachycardia with the QRS complex varying in amplitude around the isoelectric line consistent with Torsades de Pointes.

Torsades de Pointes (TdP) is a specific type of polymorphic ventricular tachycardia. The arrhythmia’s characteristic morphology consists of the QRS complex “twisting” around the isoelectric line with gradual variation of the amplitude, reflecting its literal translation of “twisting of the points.”1 This arrhythmia occurs in the context of prolonged QT. The most common form of acquired QT prolongation is medication induced.  Common causes include antiarrhythmics, antipsychotics, antiemetics, and antibiotics.2 Patient specific risk factors include female sex, bradycardia, hypokalemia, hypomagnesemia, hypocalcemia, hypothermia and heart disease.3

In the setting of prolonged QT, the repolarization phase is extended. TdP is initiated when a PVC (premature ventricular contraction) occurs during this repolarization, known as an ‘R on T’ phenomenon. TdP is often asymptomatic and self-limited. The danger in TdP is its potential to deteriorate into ventricular fibrillation.

A mainstay of management of TdP is prevention of risk factors when possible.4 Unstable patients should be treated with synchronized cardioversion.   Magnesium sulfate should be administered in all cases of TdP.1 If a patient is not responsive to magnesium, consider isoproterenol, amiodarone, and overdrive pacing.

Since this patient was asymptomatic, he was given 2gm of magnesium sulfate and placed on an amiodarone infusion, after which Tdp terminated with a resulting sinus rhythm. AICD interrogation showed multiple episodes of ventricular fibrillation. The patient was admitted for further management and to determine why his AICD was not functioning properly. 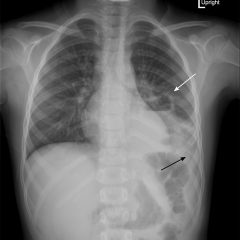 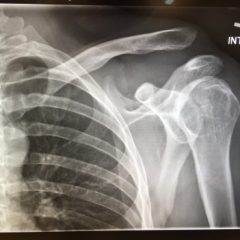