Correspondence should be addressed to Jonathan Peña, MD, at jdpena@uci.edu

NeurologyVisual EM
No ratings yet.

A 21-year-old female with no past medical history presented to the ED after multiple tonic-clonic seizures over the previous 12 hours, the longest lasting 20 seconds. She returned to baseline after each seizure, had no obvious signs of trauma, and did not exhibit any focal neurologic deficits. She denied illicit drugs or new medications. A family member noted that she had fallen from her bed (approximately 3 feet high) 2 days ago.

Non-contrast Computed Tomography (CT) of the Head showed a dense extra-axial collection along the left frontal and parietal regions, extending superior to the vertex with mild mass effect, but no midline shift.

Intracranial hemorrhage (ICH) is a term to describe any abnormal bleeding within the bony confines of the skull. Most commonly, subdural hemorrhages (SDH) result from injury to the bridging veins that lead to bleeding between the dura and arachnoid maters. However, in 20%-30% of cases an arterial source of bleeding can be found.1 For adults, motor vehicle collisions and other unintentional head trauma are typically the provoking factors in developing SDH. Falls in the elderly are a common cause of SDH since diffuse cerebral atrophy leads to increased shear forces upon vasculature structures during the fall. The risk of SDH increases with the use of anti-thrombotic agents.2

Clinical presentation varies from asymptomatic to coma (in 50 percent of acute SDH). Chronic SDH may present with headaches, light-headedness, cognitive impairment, and seizures.1 The risk of posttraumatic epileptic seizures (PTS) is higher in acute SDH. Risk factors for acute SDH PTS include low Glasgow Coma Score and craniotomy, whereas risk factors for PTS in chronic SDH include alcohol abuse, change in mental status, previous stroke, and hematoma density on CT.3

CT is the most widely used imaging modality for identifying ICH. Acute SDH (within 1-2 days) are visualized as hyperdense fluid collections that cross suture lines, thus leading to a concave, or dome-shaped appearance. As time passes, however, protein degradation and the change in structural composition of blood takes on an isodense or hypodense formation, and identification of subacute (3-14 days) or chronic (15 days) SDH can be more difficult without contrast-enhanced imaging.4 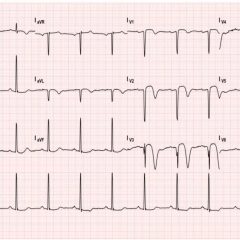