Correspondence should be addressed to Jonathan Patane, MD at jpatane@uci.edu

This was a 65-year-old male who had no significant past medical history, who presented to the emergency department with numbness to his left face and left upper and lower extremities.  He had these symptoms for two days, but did not seek medical attention. He denied chest pain or shortness of breath. As part of his workup, he had an electrocardiogram (ECG) performed.

This ECG shows deep, inverted T waves that are most pronounced in V2-V4, and are associated with continued T wave inversions in V5 and V6 and ST segment changes in V1-V3. These partially resolved on repeat ECG after cardiac catheterization where stents were placed in the left anterior descending (LAD) artery.

Wellens’ sign is a finding that is concerning for a high-grade stenosis of the left anterior descending (LAD) artery. There are two forms of Wellens’ sign on ECG; type one includes biphasic T waves in V2-V3; and type two (the patient in this case) has deep inverted T waves in the precordial leads.2   A patient with Wellens’ syndrome may have no cardiac symptoms at all, including no chest pain or shortness of breath. Cardiology consultation is required, as critical stenosis of the LAD can lead to anterior wall myocardial infarctions.1   In addition, these patient should not undergo stress testing (chemical or treadmill) as they are at increased risk of sudden cardiac death from a critically stenosed lesion.1

In this case, cardiology was immediately consulted for the Wellens’ sign on ECG.1 The patient’s troponin resulted at 22.52 ng/mL. He coincidently was found to have a pontine stroke to explain his neurologic symptoms. Once he was stabilized, he was taken for cardiac catheterization that revealed 100% stenosis of the proximal LAD. The patient underwent stenting of the proximal LAD. 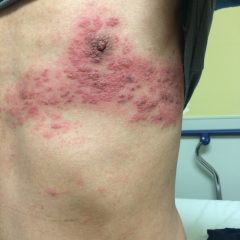 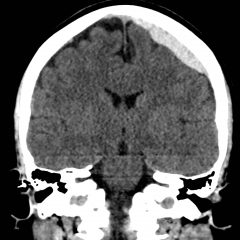