Correspondence should be addressed to Daniel Sheets, MD at dsheets@em.umaryland.edu

While watering his lawn, a 36-year-old man felt two sharp bites to his bilateral ankles. He reports that he then saw a light brown, 2-foot snake slither away from him. He came to the emergency department because of pain and swelling in his ankles and inability to bear weight. Physical examination revealed bilateral ankle swelling and puncture marks on his left lateral heel and medial right ankle. Palpation, passive flexion and extension elicited severe pain bilaterally. Blood work including prothrombin time (PT), partial thromboplastin time (PTT), international normalized ratio (INR), and fibrinogen were within normal limits. Consultation with Poison Control indicated the snake was likely a copperhead, which is a venomous snake whose bites rarely require antivenin.

In this case, ultrasonography of the lateral surface of the left foot revealed soft tissue edema (red arrow) and fluid collection (white asterisk) adjacent to the extensor tendon (white arrow). The edematous area resembles cobblestones, with hypoechoic areas of fluid spanning relatively hyperechoic fat lobules. The tendon is surrounded by anechoic fluid, expanding the potential space in the sheath. No hyperechoic foreign objects were noted.

The patient was diagnosed with soft tissue injury and extensor tenosynovitis after a snake envenomation. Snake venom contains metalloproteinases and other enzymatic proteins that cause local tissue edema and necrosis.1 After a snake bite, ultrasound can be used to assess for retained fangs, soft tissue edema, tendon sheath fluid, muscle fasciculation, and injury to deeper musculature that may not be readily apparent on physical exam.2,3 Most patients with tenosynovitis will recover with immobilization of the joint and non-steroidal anti-inflammatory medications.4 Rarely, the tendon may become infected requiring antibiotics and surgical intervention.4 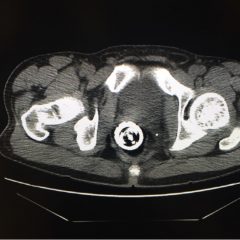 Procedural Sedation for the removal of a rectal... 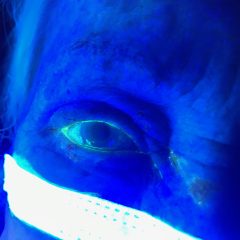