Procedural Sedation for the removal of a rectal foreign body

Correspondence should be addressed to John Costumbrado, MD, MPH at jcostumbrado@gmail.com

Abdominal/GastroenterologyProceduresVisual EM
No ratings yet.

A 40-year-old male with a history of intravenous drug use presented to the emergency department (ED) for one week of constant lower abdominal pain associated with bloody stool. He denied fever, nausea, vomiting, urinary symptoms, and testicular pain or swelling. On exam, vital signs were within normal limits. Abdominal exam was non-tender without rebound or guarding. Rectal exam was negative for occult blood but positive for a palpable firm, blunt object. A computed tomography (CT) of the abdomen and pelvis was ordered to further investigate.

Axial and coronal views on CT showed evidence of a large, tube-shaped foreign body in the rectum (see arrows) without evidence of acute gastrointestinal tract disease.

While rectal foreign bodies (RFB) are not uncommon to the ED, accurate epidemiological estimates are not available, due in part to underreporting.1 One study estimated an incidence of one patient per month that needed care for a RFB.2 Generally, patients can remove the object themselves; however, 20% of cases require endoscopic intervention and 1% require surgical intervention.3

Complications prior to or during removal of the RFB include tearing of the rectal mucosa, perforation, infection, fecal incontinence, bladder and vessel injury or migration of the RFB to the chest wall.3,5 Uncontrollable rectal bleeding, peritonitis, or perforation are contraindications to ED RFB removal and warrant surgery or gastroenterology consultation. General anesthesia can be used for laparotomy with single incision to remove RFBs in the operating room.2

In this case, procedural sedation was utilized to facilitate removal of the object. Ketamine (2 mg/kg intravenously) was initially proposed, but due to concerns of the patient’s history of drug abuse, alternatives were considered. While Ketamine is generally well-tolerated, the incidence of dysphoric reactions has been estimated to occur in 10%-20% of patients.6 There is also some evidence that patients with a history of drug abuse may be more likely to have tolerance to Ketamine that requires higher dosing.7 Taking these factors into account, Etomidate (0.2 mg/kg intravenously) was used instead with favorable results. A metallic flashlight was removed by grasping the object with a combination of forceps and manual manipulation. After RFB removal, sigmoidoscopy was recommended to assess for rectal mucosal injuries or tears.8 No additional injuries were found on sigmoidoscopy and the patient tolerated the procedure well without complications. 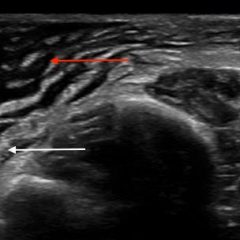 Evaluation of Snake Bites with Bedside...