Correspondence should be addressed to Michael Niechayev, MD at mniechay@uci.edu

DermatologyVisual EM
No ratings yet.

A 40-year-old female presented to the emergency department reporting a pruritic pustular rash that began on her abdomen five weeks prior. Since onset, the rash spread to her extremities, chest, and face. At presentation, she was three weeks post-partum and reported subsequent worsening of the rash, with the development of blisters on her abdomen and extremities immediately following her delivery.

Physical exam findings were significant for 1-3 cm diameter well-demarcated superficial ulcers on the patient’s abdomen and extremities, with mucosal sparing. Several small tense bullae were present on the bilateral inner thighs and numerous small reddish plaques were scattered over the patient’s back. Nikolsky’s sign was negative. No lymphadenopathy was noted.

Pemphigoid gestationis (PG) is a rare autoimmune disease caused by immunoglobulin G1 (IgG1) autoantibodies directed against collagen XVII, a glycoprotein located at the skin’s basement membrane.1 The damage these antibodies cause to the basement membrane results in a characteristically pruritic, blistering rash that typically spares the mucous membranes.1 PG has an incidence of 1 in 10,000 to 60,000 pregnancies, but can also rarely arise as a paraneoplastic manifestation of trophoblastic tumors.2 PG most often presents in the second or third trimester of pregnancy, though it may also occur in the post-partum period, and carries a high risk of recurrence with subsequent pregnancies.1,3

Diagnosis is based on a combination of clinical findings, skin biopsy, and enzyme-linked immunosorbent assay.3,4 The goal in treating PG is to decrease blister formation and relieve pruritus. However, no randomized controlled trials for the treatment of PG have been published given the rarity of the disease, and treatment recommendations are based on studies of similar skin diseases.1 Topical corticosteroids often serve as first-line treatment, given their relative safety during pregnancy, and oral antihistamines are often added to further reduce pruritus.1 For more severe cases, systemic corticosteroids can be used in the treatment of PG.3,5 Lastly, while fetal prognosis is generally good, PG is linked to an increased risk of prematurity and fetal growth restriction, and patients should be encouraged to receive close monitoring from an obstetrician.1,5,6

The patient described in this case remained stable during hospitalization, and a diagnosis of PG was confirmed by direct immunofluorescence of a perilesional punch biopsy. The patient was discharged on an oral prednisone taper in addition to topical triamcinolone 0.1% cream and oral diphenhydramine. At a follow-up appointment with dermatology one month after discharge, the patient demonstrated significant improvement. No blisters were visible on the patient’s skin, though the patient reported mild pruritus and demonstrated multiple erythematous macules and patches. 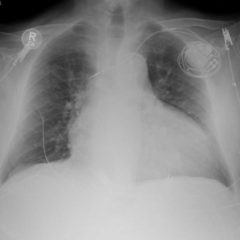 Don’t Forget the Pacemaker – A Rare... 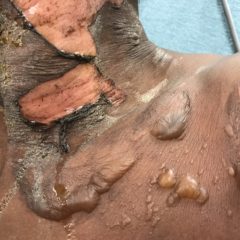