A 19-year-old female with no pertinent past medical history presented to the emergency department with sharp, non-radiating, intermittent right lower quadrant abdominal pain that began two months ago. Pain was worse with movement. She denied nausea, vomiting, constipation, fevers, chills, vaginal bleeding or discharge, and dysuria. A distended abdomen was noted on physical exam. She was sent to the emergency department by her primary medical doctor after a mass was found on ultrasound and computed tomography (CT). She noted a history of irregular menses and denied a history of sexually transmitted infections. She denied a family history of ovarian, endometrial, colon or breast cancer.

Ovarian teratomas are the most common nonepithelial benign ovarian tumor with about 30% of diagnosed women presenting with abdominal or pelvic pain.1 Associated symptoms due to mass effect include abdominal pain, constipation and urinary retention.2 The use of transvaginal ultrasonography in the emergency department is an excellent tool to identify benign teratomas, with a reported sensitivity of up to 86% and specificity of 99%.1

The highest incidence of ovarian teratomas occur in women of reproductive age (20-40 years) though they can occur at any age.3 The most common complication associated with ovarian teratomas is ovarian torsion, reported in 3% to16% of cases.4 Torsions are more common with intermediate size tumors compared to small or very rare large ones.5 A 34-year study analyzing  mature cystic teratomas revealed that the mean size for a teratoma with torsion was 6.5±2.6cm and the mean size for a teratoma that led to rupture was 5.3±3.9cm.6 Rarely, ovarian teratomas may present with intestinal obstruction which occurs when a small intestine loop adheres to the tumor. Secondary symptoms include constipation or diarrhea, rectal bleeding or urinary frequency.7

Patient was informed to schedule outpatient follow up for preoperative planning with gynecology because she would need surgical management given the size of her teratoma. 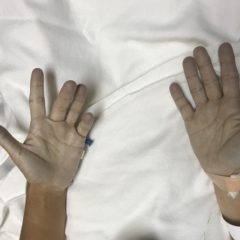 Warm & Blue: A Case of Methemoglobinemia 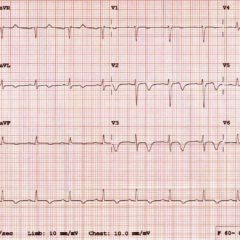