Correspondence should be addressed to Reid Honda, MD at rkhonda@uci.edu

OphthalmologyVisual EM
No ratings yet.

A 46-year-old male presented to the emergency department (ED) with severe left eye pain and decreased vision after tripping and striking the left side of his head on the corner of his wooden nightstand.  The patient arrived as an inter-facility transfer for a suspected globe rupture with a protective eye covering in place; thus, further physical examination of the eye was not performed by the emergency physician in order to avoid further leakage of aqueous humor.

The patient’s computed tomography (CT) head demonstrated a deformed left globe, concerning for ruptured globe. The patient had hyperdense material in the posterior segment (see green arrow), consistent with vitreous hemorrhage. CT findings that are consistent with globe rupture may include a collapsed globe, intraocular air, or foreign bodies.

A globe rupture is a full-thickness defect in the cornea, sclera, or both.1 It is an ophthalmologic emergency. Globe ruptures are almost always secondary to direct perforation via a penetrating mechanism; however, it can occur due to blunt injury if the force generated creates sufficient intraocular pressure to tear the sclera.2 Globes most commonly rupture at the insertions of the intraocular muscles or at the limbus. They are associated with a high rate of concomitant orbital floor fractures.2,3 Possible physical examination findings include a shallow anterior chamber on slit-lamp exam, hyphema, and an irregular “teardrop” pupil. Additionally, a positive Seidel sign, which is performed by instilling fluorescein in the eye and then examining for a dark stream of aqueous humor, is indicative of a globe rupture.4 CT is often used to assess for globe rupture; finds of a foreign body, intraocular air, abnormal contour or volume of the globe, or disruption of the sclera suggest globe rupture.2 The sensitivity of CT scan for diagnosis of globe rupture is only 75%; thus, high clinical suspicion is needed. CT should only be used as an adjunct for physical exam.3

Direct pressure (including tonometry measurements) should never be applied to a globe that is suspected or confirmed to be ruptured because of the risk for extrusion of the intraocular contents.3 Antibiotics should be given to prevent endopthalmitis. Antiemetics should also be given to prevent Valsalva maneuvers which can worsen the globe rupture.3 Ophthalmologic consultation for surgery should be obtained emergently.5 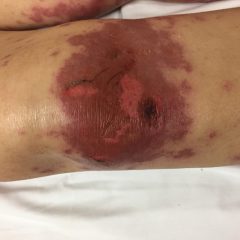 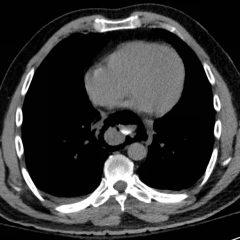