Correspondence should be addressed to Christopher Libby, MD, MPH at Christopher.Libby@ucf.edu

A 38-year-old male presents to the emergency department for a minor trauma evaluation after falling off a bicycle at a moderate rate of speed. The patient was not wearing a helmet when he hit his head with unknown loss of consciousness. Focused assessment with sonography for trauma (FAST) exam and head computed tomography (CT) were negative. Routine electrocardiogram (ECG) showed sinus rhythm with pre-excitation indicative of Wolff-Parkinson-White Syndrome (WPW). The patient confirmed a previous diagnosis of WPW, but had not previously followed up with a cardiologist.

The ECG shows slurred up-stroking of the QRS complexes characteristic of a delta wave. The PR interval is normal; however, the QT interval is greater than 110ms.

Wolff-Parkinson-White Syndrome (WPW) is a frequently encountered macro-reentrant arrhythmia characterized by a shortened PR interval less than 120ms, prolonged QRS greater than 120ms with an up-stroking QRS complex (delta wave), and occasional ST abnormalities.1 The incidence is reported to be 0.9%-3% of the general population and most diagnoses are made on routine EKGs.2,3  WPW is thought to be caused by abnormalities of conduction through the accessory pathway, also known as the Bundle of Kent, causing premature excitation of the ventricles. The complications from WPW are supraventricular tachycardia, atrial arrhythmias, and ventricular fibrillation leading to sudden cardiac death.3 Approximately 40-50% of patients who die from sudden cardiac arrest associated with WPW were previously asymptomatic.4 Unfortunately, it is agreed that approximately 50% of patients with WPW are asymptomatic and unaware of their diagnosis.5

The definitive treatment for WPW is radiofrequency catheter ablation (RFCA).  However, it comes with a low risk of complications including arrhythmias and death.6  For asymptomatic WPW, children are at the highest risk for ventricular arrhythmias while those over the age of 35 to 40 have a lower risk.7 For asymptomatic patients where the diagnosis is uncertain, electrophysiological studies (EPS) may be utilized to determine the patient’s risk for future arrhythmias and for the need for RFCA.1 RFCA may not be appropriate for every patient and is not an urgent procedure for stable, asymptomatic WPW. Our patient was discharged after evaluation for traumatic injuries was negative and we recommended that he follow-up with his primary care provider for continued management of his WPW. 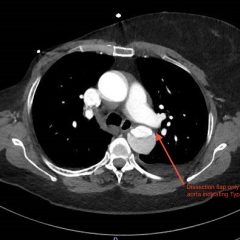 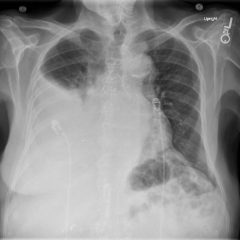