Correspondence should be addressed to Brittany Perry Hoffstatter, MD at Brittany.j.perry@gmail.com

A 59 -year-old male with no past medical history, presented to the emergency department with sharp back pain and left arm numbness that began 3-4 hours prior to arrival while he doing physical activity. One hour prior to arrival, the back pain began to radiate to his chest. The pain was intermittent and 10/10 on a pain scale. He reported that nothing made the pain better or worse. Of note, the patient had a 45 pack-year smoking history. Physical exam was unremarkable.

Wellen’s syndrome refers to specific ECG abnormalities in the precordial T wave segments of V2-V3.1,2 Recognition of this classic ECG pattern is important because it is highly specific for critical stenosis of the proximal left anterior descending artery.2,3 There are two patterns that can be seen in Wellen’s syndrome. Type A has deeply and symmetrically inverted T waves in V2-V3 (seen in 75% of cases) and Type B has biphasic T waves, with initially positive and terminally negative T waves in V2-V3 (seen in 25% of cases).4 The T waves can eventually evolve from type B to type A, which occurred in this patient while he was in the emergency department.

Clinically, patients may be pain-free when the pattern is detected. They may have normally or minimally elevated cardiac enzymes. Wellen’s syndrome can be the pre-infarction stage of coronary artery disease, meaning that these patients are at high risk for extensive anterior wall myocardial infarction within days to weeks.3 This patient was taken to the catheterization lab.  Angiogram revealed a subtotal proximal left anterior descending artery occlusion for which a drug-eluting stent was placed and the patient was discharged in good condition. 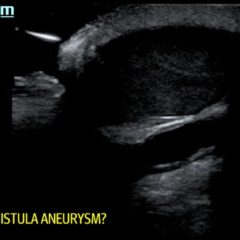 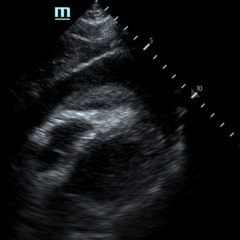