A Sublingual Mass in a 5-Year-Old Male

Correspondence should be addressed to Corrie E Chumpitazi, MD at cechumpi@texaschildrens.org

ENTVisual EM
No ratings yet.

A 5-year-old male presented to the emergency department with a mass under his tongue and tactile fever for one week. The mass had not grown noticeably since first noted by his mother. The child had no difficulty breathing, stridor, or odynophagia. He was eating and drinking well and had no other symptoms. There was no history of trauma. He was seen by his pediatrician three days prior and received a prescription for a 10-day course of amoxicillin. On physical exam, he was afebrile and had normal vital signs. Oral exam was notable for a small non-tender mass in the floor of the oral mucosa. He had no cervical swelling or lymphadenopathy. The rest of his physical examination was unremarkable.

Oral ranula. On oral inspection he had a 3 x 1.5 cm, soft, non-tender, mobile, cystic, sublingual mass on the right aspect of the floor of his mouth that did not move with swallowing (Image 1). There was mild associated submandibular swelling on the right side of his face.

A ranula is a benign lesion caused by damage to the sublingual duct leading to the accumulation of mucoid material and cystic swelling in the floor of the oral mucosa.1,2 It presents as a non-tender, translucent cystic mass under the tongue primarily in adolescents.1 The diagnosis is made by physical examination alone and does not require further imaging.2  However, some otolaryngologists prefer ultrasound or computed tomography to further characterize the lesion prior to surgery.1 Though ranulas may arise secondary to previous trauma due to scarring, they are often idiopathic.1 Ranulas are generally asymptomatic, though they can lead to difficulty swallowing and even airway compromise in severe cases.1

Referral to otolaryngology often results in conservative management for up to three months followed by resection of a symptomatic or persistent ranula larger than 2 cm in diameter.3 Alternative approaches include early removal of the involved portion of the sublingual gland or sclerotherapy as an effective first-line treatment.4

The patient in this case was referred to otolaryngology as an outpatient and underwent transoral excision of the mass. Ten days after excision, he developed oral hemorrhage from the excision site and was observed overnight after his bleeding spontaneously subsided. Since that time, he has had no other complications and the mass has not recurred. 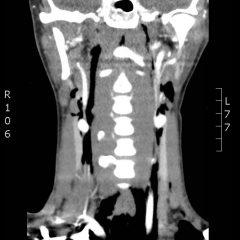 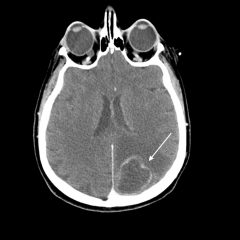