Correspondence should be addressed to Julian Jakubowski, DO at dr.jakubowski@gmail.com

UltrasoundVisual EM
No ratings yet.

A 35-year-old male patient presented to the emergency department with left foot pain and swelling. He had sustained a puncture wound with a large wood splinter to the lateral aspect of the dorsum of his foot in the week prior. He believed that he had removed the entire splinter, but over the next week, the site became increasingly red, tender, and swollen without drainage.

X-rays of the foot were obtained and no radiopaque foreign body was visualized. Due to high clinical suspicion for retained foreign body, a point-of-care ultrasound was performed by applying a high-frequency linear probe at the area of discomfort. In the long axis an ovoid focus of hypoechogenicity (orange outline) is visualized. Within this finding there is a linear focus (yellow line) of increased echogenicity measuring 1 mm in diameter and 1 cm in length. On short axis view, a rectangle focus (green dot) demonstrating shadowing (blue highlight) is seen.

Given the evidence of foreign body on ultrasound, incision and drainage was performed. It resulted in the removal of a 1 cm splinter along with small amount of purulent and serous fluid.

Due to its availability, sensitivity and specificity, ultrasound should be considered in the evaluation of foreign bodies. It can facilitate both the detection and removal of radiolucent foreign bodies. 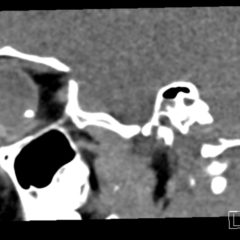 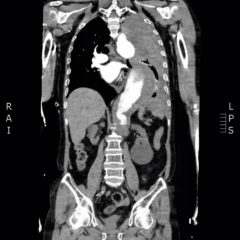