Correspondence should be addressed to Maili Drachman, MD at maili.alvarado@gmail.com

A 31-year-old female presented to the emergency department with sudden onset left lower quadrant abdominal pain and associated nausea. The patient was gravida 3, parity 1 and reported she was 6 weeks pregnant by her last menstrual period. The patient arrived writhing in pain with exquisite left lower quadrant tenderness and was unable to straighten her legs due to the pain. Bedside ultrasound was performed to address the immediate concerns of a ruptured ectopic pregnancy or ovarian torsion.

The ultrasound video clip demonstrates a transverse view of the pelvis using the endocavitary probe. The bladder can be seen on the anterior portion of the scan (yellow arrow), while the uterus with an intrauterine pregnancy is visible posteriorly (blue arrow). The thickened appearance of the uterine wall is also indicative of pregnancy. A large, anechoic cystic structure measuring approximately 5 cm is seen in the vicinity of the patient’s left adnexa (pink arrow), which raises concerns for ovarian torsion.1

Based on the clinical presentation and the bedside ultrasound, obstetrician-gynecologist (OB/gyn) was emergently consulted and the patient was transferred to the operating room (OR) where she was found to have a paratubal cyst in the left fallopian tube with associated isolated tubal torsion. After manually de-torsing the tube, which was initially dilated and dusky, blood flow was restored and the color returned to normal. A cystectomy was performed without complications. The patient was discharged later that day after the follow-up ultrasound showed reassuring fetal heart tones and good blood flow to the left ovary.

Ovarian torsion defines the instance when the ovary rotates around the infundibulopelvic and ovarian ligaments, which results in impaired blood flow to the affected ovary.1 Isolated fallopian tube torsion, as in this case, occurs when the fallopian tube torses without ovarian torsion. The incidence is 1 in 1,500,000 women.2 Clinical findings can include pelvic pain, anorexia, nausea, and vomiting.3 Because the findings can be non-specific it is important for the physician to consider a broad differential including ovarian torsion, ectopic pregnancy, hemorrhagic cyst, pelvic inflammatory disease, and endometriosis.4 Ovarian torsion can affect any age group and can quickly lead to tissue necrosis and irreversible damage; thus a high level of suspicion is important to ensure prompt diagnosis and surgical intervention.3,5,6 While ovarian torsion is predominantly a clinical diagnosis, utilizingbedside ultrasound allows for prompt diagnosis which can prevent potentially permanent damage.

When using bedside ultrasound, the most reliable indicator of ovarian torsion is an enlarged ovary, greater than 4 cm in size.3In addition to looking for an enlarged ovary, additional sonographic findings that can be indicative of torsion include a solid, cystic, or complex mass, with or without fluid, or cystic hemorrhage.4 Ovarian cysts are risk factors due to their capacity to serve as pivot points for ovaries to twist around.1,4 When performing the ultrasound, it is possible to see little or no intra-ovarian venous flow or absent arterial flow, but because there is dual blood supply to the ovaries from the ovarian and uterine arteries, normal vascularity does not exclude torsion. 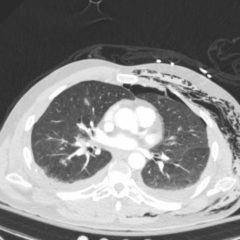 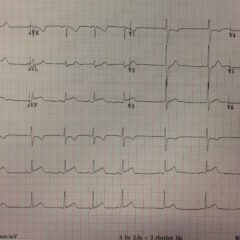 Clinical Evaluation and Management of Pediatric...