Correspondence should be addressed to Ankit Shah, MD at ankit.shah@readinghealth.org

AdministrationProceduresVisual EM
No ratings yet.

A 44-year-old female called 911 complaining of abdominal pain, but was unresponsive upon arrival by emergency medical services (EMS).  She presented to the emergency department (ED) as a full cardiac arrest and had return of spontaneous circulation (ROSC) with cardiopulmonary resuscitation (CPR) and epinephrine.  The patient had a splenic embolization 1 week prior to presentation.  Bedside ultrasound demonstrated free fluid throughout the abdomen.  As part of the resuscitation, femoral central venous access was obtained by the Emergency Department (ED) physician, and a medical student was allowed to place a Cordis over the guidewire.  The attending was next to the student, though became distracted when the patient again lost pulses.  The student lost control of the guidewire upon re-initiation of CPR.  Another Cordis was placed in the same location by the ED physician after the guidewire was seen on a chest radiograph.  The patient was taken to the operating room with massive transfusion protocol, and the guidewire was left in the vena caval system until the patient could be stabilized.  Two days later, interventional radiology removed the guidewire via a right internal jugular (IJ) approach without complications.  The patient had a prolonged and complicated course, but was discharged home two weeks later at her baseline.

Central line complications include failure to place the catheter, improper catheter location, hemothorax from vascular injury, infection, arrhythmia, and cardiac arrest1. Complications from lost guidewires include cardiac dysrhythmias, cardiac conduction abnormalities, perforation of vessels/heart chambers, kinking/looping/knotting of the wire, entanglement of previously placed intravascular devices, breakage of the tip of the wire and subsequent embolization and complete loss of the guidewire within the vascular system2. Predisposing factors to losing a guidewire are inattention, inexperienced operator, inadequate supervision or overtired staff3. The patient in this case was unstable, which contributed to lack of vigilance and distracted/inadequate supervision.

This case demonstrates the need for extreme vigilance while supervising trainees.  Although the attending was present, and assisting throughout the procedure, the provider became distracted, and the student lost control of the guidewire when CPR was resumed. 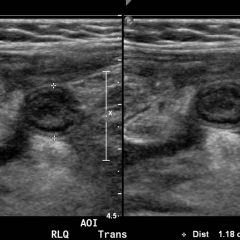 A Toddler with Abdominal Pain and Emesis 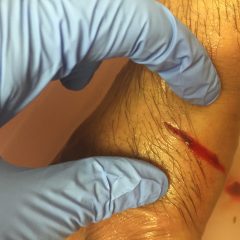