Correspondence should be addressed to Gregory S Podolej, MD at gpodolej@gmail.com

A 22-year-old male presents to the emergency department after being in close proximity to a lightning strike just prior to arrival. He was sitting on a metal folding chair during a thunderstorm with his right lower extremity resting against the chair leg. Lightning struck approximately 20 feet from the patient who reported a bright flash and loud bang. He immediately felt a burning sensation in his right lower leg. He complained of paresthesias to his right lower leg that resolved after 15-20 seconds.

The first photograph demonstrates a dendritic blister (Lichtenburg figure) on the medial aspect of his right foot where the ground current injury entered the patient’s foot. Although no data exists regarding the sensitivity or specificity of Lichtenberg figures as skin findings, they are considered pathognomonic for lightning injuries and are not produced by alternating current or industrial electrical injuries.1,2 The second photograph demonstrates a 4 x 3 cm area of petechiae where the ground current injury exited the patient.

Although the risk of being struck by lightning is very rare, lightning injury is associated with a 10%-30% mortality rate.3 Because of the extremely high electrical current and high temperatures associated with lightning discharges, victims of direct lightning strikes can suffer from a myriad of injuries including fractures, burns, blast injuries, rhabdomyolysis, compartment syndromes, and cardiac arrest.4

A lightning strike is a complex phenomenon that involves more than just the “cloud to ground” discharge we classically see and hear in the sky. Ground current or step voltage (as was the cause of injury in our patient) occurs when lightning strikes the ground and the current spreads through the ground to a nearby person. Ground currents account for 50%-55% of all lightning deaths and injuries.5 The human body is a better conductor of electricity than the ground, and thus lightning chooses the path of least impedance and travels through a victim’s legs and into the body before re-entering the ground. Several factors including duration of contact, resistance of tissues, pathway of the current, and voltage determine the extent of damage.6-8

In this patient, electrocardiogram showed sinus tachycardia. A chest X-ray was normal. Labs were significant for an elevated creatinine kinase (CK) (4622 IU/L) and 1+ blood on his urinalysis without red blood cells on microscopy. Urinalysis was also positive for myoglobin, consistent with rhabdomyolysis.  The patient was given intravenous fluids, tetanus toxoid, and he was admitted to the hospital (for observation and monitoring to ensure compartment syndrome did not develop and that his elevated CK resolved). The patient had no other complications and was discharged two days later in stable condition.

As demonstrated by our case, patients with lightning ground current injury can have significant injuries despite very subtle physical exam findings. This highlights the importance of performing a thorough physical exam and evaluating for associated lightning-related injuries even in patients not directly struck by lightning. 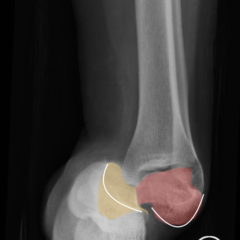 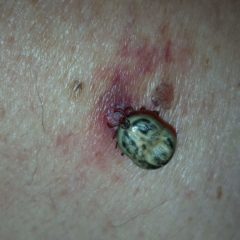