Point-of-care Ultrasound for the Diagnosis of Ectopic Pregnancy

Correspondence should be addressed to Maili Alvardo, MD at maili.alvarado@gmail.com

Ob/GynUltrasoundVisual EM
No ratings yet.

A 31-year-old female presented to the Emergency Department by ambulance with severe abdominal pain and presyncope. On exam, the patient was hypotensive with suprapubic tenderness. Though the patient denied being pregnant, her labs showed a beta human chorionic gonadotropin (hCG) of 38,000 mIU/ml. A bedside transabdominal pelvic ultrasound revealed an ectopic pregnancy and the patient was taken to the operating room for an emergent right salpingectomy.

In early pregnancy, ectopic pregnancies share the same symptoms as normal pregnancies, including a missed menstrual period, fatigue, and nausea. The first classical signs of an ectopic pregnancy are vaginal bleeding, dizziness, and lower abdominal and/or pelvic pain usually 6 to 8 weeks after a missed menstrual period.5 A meta-analysis of studies on pelvic ultrasonography demonstrated a sensitivity of 99.3% and a negative predictive value of 99.6% for diagnosing ectopic pregnancy and therefore should be utilized as a first-line diagnostic tool for emergency physicians.6 If diagnosed, treatment options available include surgery or methotrexate administration.5 If diagnosed very early, an alternative, conservative treatment option is to monitor if the ectopic pregnancy resolves spontaneously without intervention.5 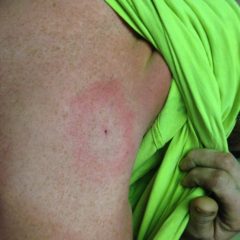 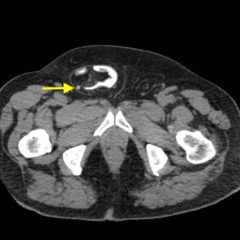 An Elderly Male with Amyand’s Hernia