Correspondence should be addressed to John Costumbrado, MD, MPH at JohnChristian.Costumbrado@hcahealthcare.com

A 39-year-old male with a history of type 2 diabetes was brought in by ambulance to the emergency department as a trauma status post motor vehicle versus pedestrian accident. The patient was walking along a surface street when he was struck on the left side of his body by a vehicle traveling approximately 35 miles per hour. On arrival, he complained of generalized left-sided body pain. An 18-gauge intravenous (IV) line was placed in the left antecubital fossa and a computed tomography (CT) of the chest, abdomen and pelvis was obtained with iodinated contrast. Shortly after acquiring CT images, portable radiographs were taken of the upper and lower extremities revealing iodinated contrast extravasation into the left distal arm, left antecubital fossa and left proximal forearm. Other than mild left-sided shoulder pain, the remainder of the patient’s left upper extremity was asymptomatic. The patient had an unremarkable neurovascular exam and upper extremity compartments were soft. Throughout the patient’s ED course, there were no further signs or symptoms of compartment syndrome (ie,the classic 5 P’s of pain, paresthesias, pallor, paralysis, and pulselessness).

The two radiographs demonstrate extravasation of radiopaque iodinated contrast in the lower left upper extremity with most seen in the left antecubital fossa and left proximal forearm. Extravasation is seen in the subcutaneous and subfascial tissue.

The use of contrast media is an important component of diagnostic imaging because it improves the differentiation of structures and tissue.  Computed tomography imaging with contrast is often utilized in blunt trauma to detect acute injuries. One of the complications of contrast-enhanced CT studies is extravasation of the contrast media. Extravasation is defined as the inadvertent release of solution from the intravascular compartment into adjacent tissues.The incidence of extravasation in patients undergoing contrast-enhanced CT imaging is low, approximately 0.1 to 1.2% of patients.1-4  Risk factors for contrast extravasation include female gender, older age, altered vasculature (eg, diabetes, atherosclerotic peripheral vascular disease, prior procedures), power injection with higher injection rates, use of older age IV cannula (ie, 24 hours or more after placement) and using a site other than the antecubital fossa (eg, 1.8% in the dorsum of the hand versus 0.8% in the antecubital fossa).5  There is some evidence that higher rates of extravasation occur with smaller bore catheters (eg, 22-gauge); however, there have been conflicting reports on the issue.5

The diagnosis of contrast media extravasation is clinical. Patients may report pain, burning, numbness, swelling, and stiffness over the contrast injection site.2  The site of injection may become erythematous and edematous. Most contrast media extravasation have no long-term sequelae; however, skin ulceration, soft-tissue necrosis and compartment syndrome are known to have occurred 2,3,6  The incidences of complications are unclear given the rarity of contrast extravasations. In one study, a single case of compartment syndrome was reported among 442 patients in which follow-up information was available.3  It is important to consider compartment syndrome as the classic symptoms as described previously (ie, the 5 P’s with paralysis and pulselessness being late findings) may be mild or absent. If there is concern for severe extravasation injury, immediate surgical consultation is indicated.4  Detection of extravasation can be challenging as a case report of extravasation from an automated contrast injector noted that the injector’s pressure monitor did not detect the abnormal injection and the observed pressure waves were indistinguishable from what is seen in uncomplicated infusions.7  Additionally, the volume of contrast extravasation does not necessarily correlate with the severity of injury; therefore, the patient’s signs and symptoms should dictate the need for consultation. After extravasation, one or more of the following should prompt the involvement of surgery: evidence of altered tissue perfusion (ie,prolonged capillary refill time), progressively worsening pain or edema, sensory changes, decreased passive or active range of motion of the extremity (ie, elbow, wrist, or fingers), skin blistering or ulceration.4  Otherwise, if the patient is asymptomatic or only has mild symptoms, contrast extravasation can often be treated conservatively with elevation of the affected limb, cold compress, observation, and clinical follow-up.1 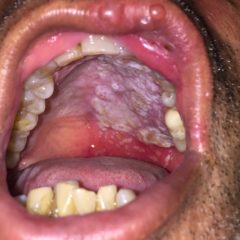 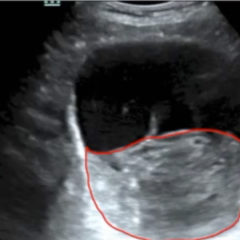 Point-of-care Ultrasound in the Diagnosis and...