Correspondence should be addressed to Jaymin Patel, MD at jayminpatel25@gmail.com

Cardiology/VascularDermatologyVisual EM
No ratings yet.

A 65-year-old male with a past medical history of hypertension presented to the emergency department with a rash on both of his thighs and legs for the last ten days. The patient stated that he initially developed blisters on both of his knees, which then popped and scabbed over. He then noticed the gradual onset of a purple rash over his knees that was painful and warm to the touch. The patient reported cocaine use for the past two months but reported that he stopped after he noticed the blisters because he had previously been hospitalized for a similar condition in 2013. His rash at that time was attributed to an adulterant in the cocaine. He stated that in 2013 he required a several-day hospital stay for renal injury. On exam, his vital signs were within normal limits and he was afebrile. Lab workup was significant for a serum creatinine of 3 mg/dL (previous baseline 1.0 mg/dL) and a hemoglobin level of 7.4 g/dL (baseline between 8 and 9 g/dL).

In 2009, the drug enforcement administration (DEA) reported that 30% of seized cocaine was found to be cut by Levamisole, which is thought to be primarily used as a diluent.1  Levamisole is an immune modulator and anthelminthic agent used in the 1970’s as a therapy for conditions like rheumatoid arthritis, pediatric nephrotic syndrome, and breast cancer. Its use was discontinued when patients began exhibiting serious side effects including agranulocytosis, thrombocytopenia, arthritis, vasculitis and skin necrosis.2  These side effects predominantly occurred in women and had a mean age of incidence of 44 years when used as an immunomodulatory agent.3  Levamisole-induced vasculitis has since become an increasingly recognized complication of cocaine use. It commonly presents with fever, myalgias, arthralgias and skin findings that can include purpura, petechiae, subcutaneous nodules, bullae and necrosis.4  The most common complication is the need for surgical consultation and debridement if the vasculitis leads to skin necrosis. Our patient presented with an acute kidney injury; however, this is not widely reported in other case studies.

Treatment is largely supportive, although agents such as steroids, nonsteroidal anti-inflammatory drugs (NSAIDs) and colchicine have reportedly been used.5  Disposition is variable and largely depends on the severity of vasculitis and resulting skin findings. The patient should be encouraged to stop cocaine use given a high likelihood of re-exposure to Levamisole. The patient presented in this case was admitted to the hospital due to both his skin findings and acute kidney injury. His lesions and renal injury improved over time and he was discharged home. 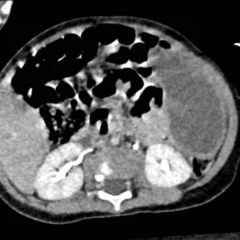