Correspondence should be addressed to Nichole Niknafs, DO at nicholeniknafs@gmail.com

ENTVisual EM
No ratings yet.

A 40-year-old male with no past medical or surgical history presents to the emergency department for evaluation of a growth on his left ear over the past month. He reports a history of trauma three weeks ago, where he was involved in a bar fight and was punched in the ear. He denies any discharge, hearing loss, bleeding or being bitten. He states that since the injury his ear has become more swollen.

On exam, the patient has a gross deformity to the left pinna that was not painful to touch or fluctuant. Findings and history are consistent with cauliflower ear, secondary to a chronic auricular hematoma.

Auricular hematomas are a common complication after blunt trauma to the outer ear.1 Blood gathers between the perichondrium and cartilage after being separated due to the trauma.1-3 Usually, the perichondrium adheres to the cartilage of the outer ear through an extensive layer of blood vessels. Blunt trauma to the ear causes its separation, allowing for blood to collect and form a hematoma. If the blood is not drained, the collection causes infection or cartilage necrosis, leading to perichondritis, and ultimately causing the cosmetic complication of what is known as cauliflower ear.2-5

Indications for drainage of hematoma within the emergency department include any traumatic swelling to the pinna that is within seven days of the initial trauma. Procedure for drainage is as follows: 1) Perform an auricular block, 2) Remove the clot either by making an incision on the auricular crease or by needle aspiration, 3) Place a compression or bolster dressing to prevent further clot formation.  Patients should be given antibiotics that cover Pseudomonas and Staphylococcus aureus such as ciprofloxacin, and need close follow-up with otolaryngology (ENT) for wound check within 2-3 days.3-5 Contraindications to drainage within the emergency department include patient presenting more than one week after the initial trauma, and history of recurrent hematomas or cauliflower ear.3-5

In addition to the cosmetic complication of cauliflower ear, a more serious complication of auricular hematomas is septic necrosis due to infection with gram-negative bacilli, such as Pseudomonas aeruginosa and E. coli; approximately 95% of cases are due to Pseudomonas aeruginosa, with co-infection with E. coli in half those cases,5 Staphylococcus aureus is less common and has been found in roughly 7% of cases.5 Septic necrosis of the ear requires incision and drainage, and hospitalization for intravenous antibiotics with antipseudomonal and gram-positive coverage, such as ciprofloxacin, clindamycin, or a 3rdor 4thgeneration cephalorsporin.4-6

Once cauliflower ear forms, treatment from an emergency department standpoint is limited, especially if there is no evidence of infection. However, there are several case reports showing successful correction by plastic surgeons through surgical removal of the calcified hematoma and reshaping of the fibrous cartilage.7 The patient in this case was offered follow-up with ENT for surgical removal and cosmetic repair. 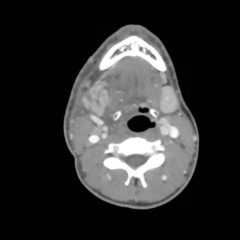 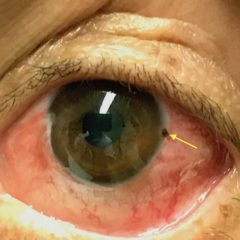