Correspondence should be addressed to Lindsey Spiegelman at lspiegel@uci.edu

40-year-old male presents to the emergency department after falling off a ladder. He was repairing a window when he fell, landing on the ground 12 feet below. The patient landed onto his feet bilaterally and then fell backwards onto his buttocks. On arrival, the patient had bilateral foot pain. He denied any back pain, headache, or loss of consciousness.

The right ankle lateral radiograph shows a comminuted, non-displaced fracture of the posterior calcaneus (red arrow) in addition to fracture fragments along the heel pad margin (blue arrow).  The left ankle lateral radiograph shows a displaced, comminuted fracture of the mid to posterior calcaneus with extension into the subtalar joint posteriorly (purple arrow). There is subcutaneous air seen anteriorly to the tibiotalar joint space (green arrow) in addition to a joint effusion. Of note, the Böhler’s angle in the left x-ray is 16 degrees which is consistent with a fracture (see red annotation showing Böhler’s angle).

Calcaneal fractures occur typically in adults who have undergone significant axial load on their feet secondary to a fall from high height.2,3 There are two broad types of calcaneal fractures: intraarticular and extraarticular.2 The intraarticular fractures are colloquially referred to as a “Lover’s Fracture” as they have been known to occur in those jumping out of a tall window to escape the wrath of a lover’s spouse.1 Calcaneal fractures are best diagnosed with a CT scan or with lateral x-ray by measuring Böhler’s angle.2,3 This is the angle formed by the intersection of two lines demonstrated on a normal lateral ankle radiograph. The first line is drawn between the superior aspect of the anterior process of the calcaneus (point A) and the superior edge of the posterior articular facet (point B). The second line is drawn between the superior aspect of the posterior calcaneal tuberosity (point C) and point B.2 The normal angle is 25-40 degrees.2 If the angle is less than 25 degrees then the interpreter should suspect a fracture (sensitivity 100%, specificity 82%), although a normal Böhler’s angle does not exclude it.4 Fractures of the calcaneus which do not involve the subtalar joint with associated central body compression may demonstrate a normal Böhler’s angle, as seen in our patient’s right ankle radiograph with an ankle of 36 degrees. This angle varies between individuals therefore it is helpful to have the alternative side as a comparison.2,3 This patient has bilateral calcaneal fractures, yet the Böhler’s angle is indicative of a fracture only on his left ankle, where there is intraarticular extension into the subtalar joint. Patients with bilateral calcaneal fractures should have further spine evaluation to exclude associated injuries related to axial loading. 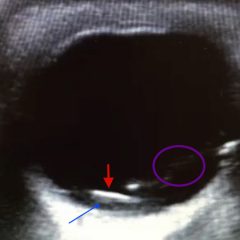 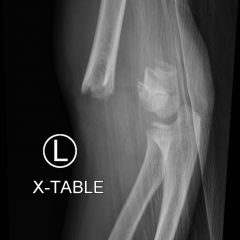