Beware the Devastating Outcome of a Common Procedure

Correspondence should be addressed to Ellsworth J Wright IV, MBS at ellsworthw@gmail.com

NeurologyProceduresVisual EM
No ratings yet.

A 64-year-old female with a history of gastroesophageal reflux and alcohol abuse presented to the emergency department with altered mental status. The patient underwent outpatient endoscopic lower esophageal dilation at a surgical center earlier in the day and received a total of 150 mg of propofol intravenously. After the completion of the procedure, the patient never regained consciousness, which prompted her transfer to the emergency department via ambulance for evaluation.

Air embolism after endoscopy is an iatrogenic event associated with high morbidity and mortality.1 Endoscopy creates a favorable hydrostatic pressure gradient; mucosal barrier disruption, duodenocaval fistulas, and direct vessel breech have all been reported as potential causes allowing the passage of gas into systemic circulation.2 The most common complications of endoscopy that ranked high on our differential included hypoxemia, hypercapnia, aspiration pneumonia, hypotension, arrhythmia, myocardial infarction, and cerebrovascular event.3

This event can arise in clinical and non-clinical settings and the diagnosis of cerebral air embolism should begin with clinical suspicion and evaluation. Most common causes include thoracentesis, hemodialysis, angiography, tissue biopsy, scuba diving, and central line or other vascular access procedures. Clinical signs of air embolism are broad depending on the affected system and include altered mental status, focal neurologic deficits in the distribution of the affected neurological region, cyanosis, hypoxia, hypercapnia, hypotension, wheezing, and bronchospasm.4 Recommended diagnostic imaging for cerebral air imaging includes CT and magnetic resonance imaging (MRI), but CT is most often performed first due to availability and the short duration of the test.5 The location of intracranial air emboli can be found in the intra-axial or extra-axial distribution and may indicate the possible etiology. Pneumocephalus is usually found in the extra-axial space most commonly after trauma or neurosurgery while air emboli are found in the intra-axial vascular distribution.6

Expedient management and treatment of cerebral air embolism is imperative to improve morbidity and mortality, the degree of which is determined by volume of gas, rate of accumulation, and the patient’s position at time of event. The first goal in the approach to cerebral air embolism is to stop the inciting event and prevent further passage of air into systemic circulation. Administration of oxygen will aid in a favorable diffusion gradient as air emboli cause endothelial damage, secondary vasospasm, and capillary leakage.4 Placement of the patient in the left lateral decubitus, Trendelenburg position, or a combination of both is recommended if embolus is venous, while the patient should remain supine if arterial.7 Hyperbaric oxygen therapy is the gold standard and definitive treatment. This should be initiated as soon as possible because it diminishes the volume of intravascular air emboli, decreases cerebral edema, and increases partial pressure of diffused oxygen.5 The reported mortality rate for patients left untreated is >90%, while patients that undergo hyperbaric oxygen therapy have been reported to reduce this ﬁgure to 7%. It is beneﬁcial up to 30 hours after insult, but the best outcome is achieved when therapy is instituted within the ﬁrst 5 hours.8

In this case, the patient was placed in Trendelenburg position and high flow oxygen therapy initiated. The patient did not meet criteria for hyperbaric therapy at various regional medical centers due to her severe neurologic deficits and poor prognosis, and was admitted to the intensive care unit for further care. The patient expired ten days after admission. Overall, we present a diagnostically interesting case of cerebral air embolism after endoscopy. The presented patient’s recent history of endoscopy and unresponsive state presented a diagnostic dilemma, with neurological status implicating a central nervous system insult. It is crucial for emergency physicians to maintain a high level of suspicion to promptly identify and initiate hyperbaric therapy. 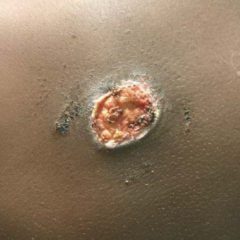 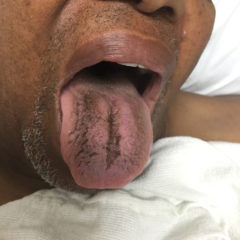