Correspondence should be addressed to Shaza Aouthmany, MD at Shaza.aouthmany@utoledo.edu

The goal of this simulation is to educate emergency medicine students, residents, attending physicians, and mid-level practitioners to recognize, diagnose, and manage acute cyanide toxicity.

Cyanide has an almond scent and is a naturally occurring compound. It is present within many different types of plants and fruits including apricots, apples, peaches, lima beans, and cassava plants but is harmless.1 The trace amounts of cyanide found within organic materials is of little concern because its high reactivity causes it to be metabolized rapidly and create other compounds. However, modern synthetic materials such as plastics, papers, textiles, and machinery can release a much greater concentration of hydrogen cyanide when exposed to high temperatures.1 As the use of contemporary nitrogen-containing synthetic polymers has expanded, the possibility of cyanide toxicity has become increasingly common and severe. Hydrogen cyanide is especially dangerous to humans because the gaseous form reacts quickly upon inhalation.2

Symptoms of cyanide toxicity include headache, nausea, shortness of breath, and altered mental status.1These are similar to those of carbon monoxide and carbon dioxide inhalation. However, symptoms of cyanide toxicity cannot be treated with supplemental oxygen as carbon monoxide and carbon dioxide are. Cyanide toxicity must be treated with an antidote – sodium thiosulfate, sodium nitrite, and hydroxocobalamin.4 Each of the antidotes works by binding with the highly reactive cyanide, neutralizing the compound, and converting it into a water-soluble product that will be cleared through renal excretion.4

Fire victims often present to the emergency department critically ill. They will likely have obvious external thermal burns and traumatic injuries; however, it is important for emergency personnel to recognize the respiratory distress and metabolic derangements that are most likely occurring due to toxic gas inhalation. People who are trapped within a burning structure are exposed to carbon monoxide, carbon dioxide, and cyanide from the combustion of contents within the building. These toxic gasses will cause severe tissue hypoxia without significant vital sign changes.5 The respiratory distress and metabolic compromise will be acutely more fatal than the obvious external injuries and burns. The challenge in treating these patients is for the healthcare team to know the differential diagnoses, prioritize airway, breathing and circulation, and to empirically treat the patient as if they have a confirmed exposure.

It is estimated that 35% of all fire victims have toxic levels of cyanide upon arrival to the emergency room.2Acute cyanide toxicity can become fatal within minutes; however, a prompt diagnosis and treatment can be lifesaving. Unfortunately, due to the limited amount of time the human body can sustain anaerobic metabolism and tissue hypoxia, blood test results are not available in time to be clinically applicable.2 Rather, the emergency room personnel must begin treatment immediately upon recognizing that toxic smoke inhalation may have occurred.

We understand the importance of knowing how to treat fire victims. Therefore, the goal of this simulation case is to expose the emergency providers to cyanide poisoning and educate emergency providers about the critical steps of how to approach, diagnose, and treat cyanide toxicity.

This is a high-fidelity simulation case in which participants work through a case of a patient who has been exposed to fire. The participants will be able to work hands-on to evaluate, diagnose, and treat cyanide poisoning in an emergency event. Afterwards, there will be a small group discussion and debriefing of the case in order to review patient care skills, interpersonal and communication skills, medical knowledge, and system-based practice.

The participants were instructed to complete a survey before and after the simulation case. A quality Likert Scale was used to assess the participants’ comfort level of diagnosing, treating, and managing a patient with toxic smoke inhalation. A score of 1 represented a negative experience and 5 represented a very positive experience. The surveys were then reviewed by the research team to determine if the simulation case improved the participants’ comfort level. The survey answers were compared collectively, as well as individually, and were analyzed between the pre-simulation and post-simulation results.

This simulation allows providers to focus on victims of fire. Fire victims are often critically ill and require time sensitive treatment. This simulation gives providers a chance to review their knowledge and prepare them for real life cases. Based on the survey results, the simulation improved awareness and understanding of the symptoms of acute cyanide toxicity and improved the participant’s ability to recognize, diagnose, and treat cyanide poisoning.

Aortic Dissection Presenting as a STEMI 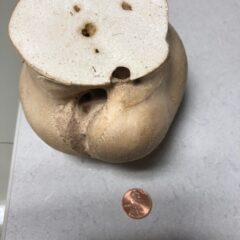 Mushroom for Improvement Case Report: The...