Low Fidelity Trainer for Fiberoptic Scope Use in the Emergency Department

Garren Giles, DO*, Dominic Diprinzio, DO* and Jordana Haber, MD*

Correspondence should be addressed to Garren Giles, MD at garren.giles@unlv.edu

Given that fiberoptic intubation is a rarely performed procedure in the clinical setting, the most practical way for EM learners to gain proficiency would be through simulation. The use of fiberoptic trainers in anesthesiologist resident training has shown improvement in first pass success and overall skills with using the fiberoptic scope.3-6 Simulation has also been shown to improve resident procedural knowledge and skills in many other fields.7-11 Simulation offers training with seldom performed procedures, and there is evidence that simulation does improve patient outcomes and reduce errors.2,12-14 In order to help EM learners gain confidence and increase their comfort in using the fiberoptic scope, we developed a low fidelity training model that allows the learner to practice fiberoptic intubation.

By the end of this training session, learners will be able to 1) list indications, contraindication, and complications in performing fiberoptic intubations, 2) know how to use and maneuver a fiberoptic scope, and 3) be able to successfully intubate the trainer model.

The training model consists of a large 55-gallon tote with polyvinyl chloride (PVC) pipes enclosed in the tote. The pipes were arranged in various manners: several pipes simulated the oropharynx and trachea, and others were arranged into a series of mazes, to require the learner to manipulate the scope through the maze to reach the end. The multiple stations within the model provided ample opportunity for the learner to acquire confidence with the fiberoptic scope and the movements required to maneuver the scope into position.

The model was used in our weekly Emergency Medicine conference during a low fidelity simulation day.  The residents were split into groups consisting of 5-6 learners.  The residents and medical students were given a brief 5-minute lecture on fiberoptic intubation, which reviewed indications for fiberoptic intubation, and a demonstration on how to operate the fiberoptic scope. Following the briefing, each group had approximately 25-30 minutes to practice using the simulated fiberoptic scope model.  Each learner in the group was then encouraged to practice navigating the other mazes at their own discretion. Residents and medical students were given a survey before and after using the fiberoptic training model to assess their knowledge and confidence in performing the procedure.

The use of the fiberoptic trainer was successful in helping learners to become more familiar with the fiberoptic scope and learn the skills to maneuver the scope successfully through the trainer. Each resident performed a survey prior to and after the fiberoptic instruction and training.  They were asked to rate their confidence in identifying airway landmarks, perform the procedure without supervision, and identify correct supplies needed for procedure.  All areas increased in confidence except in identifying correct supplies for PGY-II (-0.1), and PGY-III (-0.4).  The greatest increase was amongst PGY-I residents in confidence identifying airway landmarks, with an increase of 4.2.

As with any simulation model, this model does not perfectly recreate human anatomy. For example, in our model there were no simulated secretions or blood. The actual appearance of the anatomy will be very different from that which was used in our model, which may lead to an unsuccessful intubation attempt.  The scenarios in which we were using the trainer was a low stress environment, unlike the usual emergency setting.  Despite this, there was an increase in learner confidence in using a fiberoptic scope to manage emergency airways.  It also offered a unique experience and gave the learners an opportunity to learn how to manipulate the fiberoptic scope that a traditional high fidelity model may not offer. Future comparisons could be made between a low fidelity simulation and high fidelity simulation device, and the addition of simulated secretions could help increase learning and confidence in fiberoptic intubations. 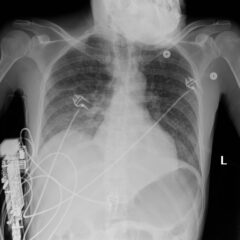 A Case Report on Miliary Tuberculosis in Acute...