Zachary Hampton, DO*, Alex Davis, DO* and Andrew Kalnow, DO*

Correspondence should be addressed to Zachary Hampton, DO at zachary.hampton@ohiohealth.com

Three dimensional printed cricothyrotomy trainers are designed to be used at all levels of training in emergency medicine, both for skill acquisition and to prevent skill atrophy.

Simulation has long provided a means to train providers on rarely performed procedures.1,2 For example, surgical cricothyrotomy has commonly been practiced in a simulated environment almost exclusively via low-fidelitymodels.3-6 What seems to be lacking in this training is simulation of needle cricothyrotomy for the pediatric population. Needle cricothyrotomy remains the standard of care for temporary airway management in a “can’t intubate, can’t oxygenate” scenario for pediatric patients. In order to address this educational deficiency, we designed a 3D printed pediatric needle cricothyrotomy trainer using evidenced-based cadaveric literature demonstrating neonatal cricothyroid membrane dimensions. These trainers will serve as a simulation tool that will help educate emergency medicine residents to perform a rare, high-stakes procedure within a controlled environment.

By the end of this educational session, participants should be able to:

Trainers were created to enhance needle cricothyrotomy training in this rarely performed, yet critical procedure.  It was felt that this procedure was only discussed in concept. There was no hands-on, procedure-based option available to realistically reproduce the procedure in a controlled training environment, and we felt the creation of a task trainer was ideal to address this deficiency.  Once the trainers were created, we curated assigned pre-reading using a flipped classroom approach. The idea was to provide learners with multiple resources including textbook chapters, blogs, and podcasts, so that they could choose one or two resources that matched their learning style. We felt this was the best way to ensure learner retention. Additionally, we created a PowerPoint presentation to illustrate the stepwise procedure, required equipment, indications/contraindications, and ventilation aspect of the procedure, which can be reviewed with learners prior to performing the hands-on portion of the skills station.

In order to create such a trainer, we worked in conjunction with the OhioHealth Simulation Department to obtain a 3D printer. Adult cricothyrotomy trainers were previously purchased from The Airway App, a company specializing in airway management education. The company also provides a standard template library (.STL) file that contains code for 3D printing cricothyrotomy trainers. Using this code, we made changes to the scale in order to create a smaller model that would resemble neonatal, school-aged, and adolescent patients (25%, 33%, and 50% of the original adult trainer, respectively). These scale models, particularly the neonatal model, were chosen based on the neonatal cadaveric measurements researched by Navasa, et al.7

To prepare the trainer for use, sim skin and sim tape were used to cover and obscure the landmarks. Learners were given the materials previously discussed in preparation of the skills lab. Although all sizes of trainers were used by the learners, particularly attention was paid to the neonatal trainer. Emphasis was placed on the difficulty finding landmarks during this procedure. Instructors were available for the entirety of the skill station in order to answer questions and give direct feedback. Debriefing was performed at the end of the skills session.

Post-simulation surveys were completed by PGY 1-4 emergency medicine resident physicians assessing pre- and post-simulation procedural comfortability using a 5-point Likert scale. In this survey, 1 represented “not comfortable at all” while 5 represented “completely comfortable.” Two, three, and four showed a gradual increase in comfortability, respectively. Median pre- and post-scores were calculated with interquartile ranges (IQR). A two-tailed Mann-Whitney U test was performed for statistical significance. Realism and future use were also surveyed.

Novel 3D printed needle cricothyrotomy trainers are a much-needed addition to emergency medicine procedural training. Specifically, we focus on the use of low-cost, high-fidelity trainers for educating emergency medicine resident physicians. By using a pre-templated .STL file, we were able to manipulate sizes and dimensions to create several simulation trainers for simulating needle cricothyrotomy. Our results show that these trainers are valuable to emergency medicine procedural training, increasing resident comfortability. Furthermore, participants feel this is realistic and would recommend this for future simulations. Given the relative ease and low-cost nature of these trainers, in addition to their proven benefit with residents, we hope that others will be able to use similar trainers to help develop needle cricothyrotomy skills at all levels of training. 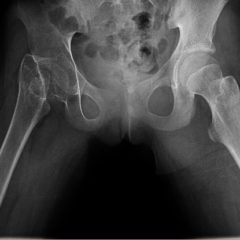