Correspondence should be addressed to Blake Collier at blcollier@lakelandhealth.org

A 22-year-old male presented to the Emergency Department complaining of right shoulder pain after a motocross accident. He was traveling at approximately 10 mph around a turn when he lost control and was thrown over the handlebars, landing directly on his right shoulder.  On arrival, he was holding his arm in adduction and internal rotation.  An area of swelling was noted over his anterior shoulder. He was unable to abduct his shoulder. No humeral gapping was noted. He had normal neuro-vascular status distal to the injury.

Radiographs demonstrated posterior displacement of the humeral head on the “Y” view (see white arrow) and widening of the glenohumeral joint space on anterior-posterior view (see red arrow). The findings were consistent with posterior dislocation and a Hill-Sachs type deformity.  Sedation was performed and reduction was attempted using external rotation, traction counter-traction. An immediate “pop” was felt during the procedure. Post-procedure radiographs revealed a persistent posterior subluxation with interlocking at posterior glenoid. CT revealed posterior dislocation with acute depressed impaction deformity medial to the biceps groove with the humeral head perched on the posterior glenoid, interlocked at reverse Hill-Sachs deformity (see blue arrow). 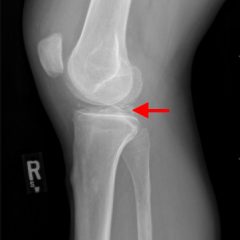 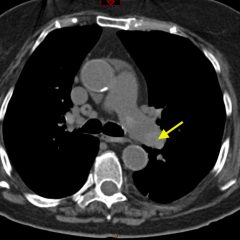